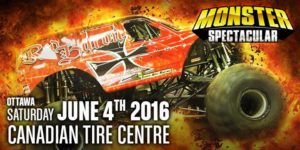 Do you want to win tickets to the Monster Spectacular show coming to Ottawa at the Canadian Tire Centre on June 4th 2016? Keep locked into CKWE or check out our Facebook page https://www.facebook.com/CKWE103.9Radio/ for your chance to win tickets!!!

Monster Spectacular, the ultimate sports and entertainment spectacle mixing racing, showmanship and the ultimate fan experience into one incredible, action packed live show, announced that it will roar into Ottawa on Saturday, June 4, at 7 p.m. Monster Spectacular will electrify the crowd with breathtaking stunts and the power of the world’s most popular monster trucks, including Black Stallion, former World champion Bounty Hunter and latest in monster truck technology Overkill Evolution.

For more than 30 years, Michael Vaters – one of the sport’s original superstars – has entertained fans behind the wheel of Black Stallion. With more world firsts than any other driver, including the first to successfully jump another monster truck while driving forward and then in reverse, fans can expect an over-the-top, wild freestyle performance when the light turns green at Canadian Tire Centre.

In a short amount of time, Trent Montgomery has quickly risen to the top of the monster truck industry. Every time he gets behind the wheel of Jimmy Creten’s redesigned Bounty Hunter, Montgomery is a threat to win, especially when it comes to side-by-side racing and the wheelie competition in which he’s taken the slap wheelie to a whole new level.

Second generation monster truck driver Mike Vaters II, took the monster truck industry by storm in 2014 when he debuted behind the wheel of Overkill Evolution, a state-of-the-art, 3D computer engineered machine. Vaters was named Rookie of the Year and then drove Overkill Evolution to the Young Guns Shootout Championship, which he then followed with a record-setting performance in the World freestyle final. Fans in Ottawa can expect a no-holds-barred spectacular every time he roars Overkill Evolution into the arena.

Check out http://www.capitaltickets.ca/event/monster-spectacular-16/ for all info if you would like to purchase tickets!!

Previous Article Want to win your way to the HARLEM GLOBETROTTERS??!?!
Next Article   THE BLUESMAN!!!!!!