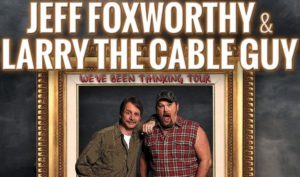 Superstar comedians Jeff Foxworthy and Larry the Cable Guy will reunite on the We’ve Been Thinking Tour to bring an unforgettable night of comedy to Richcraft Live at Canadian Tire Centre. During this momentous event, both comedians will deliver a laughter-packed evening of all new material before they come together on stage for an uproarious encore you won’t want to miss!

Tickets are $69.50; reserved seating (plus CRF and service charges).

Tickets can be purchased by visiting www.Ticketmaster.ca, www.canadiantirecentre.com, by phone at 1-877-788-FANS; in person at each of the 10 participating Canadian Tire stores in Ottawa as well as the store in Perth, The Sens Store at Carlingwood Mall and Place d’Orléans, Algonquin College, Superior Photo and at the Canadian Tire Centre box office.

“RFD-TV is so very proud to be the presenting sponsor for Jeff and Larry’s upcoming comedy tour. Their values match up so well with RFD-TV’s goals as we both strive to provide family-oriented entertainment from a rural perspective. We look forward to using this opportunity to work with our cable partners in each of these cities to expand rural programming in our continuing effort to reconnect city with country again. Humor is a great way to do that,” said Patrick Gottsch, CEO and founder of RFD-TV.

“When I am not on stage I can usually be found riding a tractor on my farm. For that reason I am thrilled to have RFD-TV as a sponsor of our new tour,” commented Jeff Foxworthy. “I am really looking forward to the tour, which has all new material, as well as touring with my great friend Larry the Cable Guy!”

“I love RFD-TV and have watched it long before Patrick lost a lot of money to me at golf,” said Larry the Cable Guy. “To have them sponsor our show means a lot and I hope that through those shows we can help spread the word of RFD-TV. Git-R-Done!”

Jeff Foxworthy is one of the most respected and successful comedians in the country. He is the highest selling comedy-recording artist in history, a multiple Grammy Award nominee and bestselling author of more than 26 books. Widely known for his redneck jokes, his act goes well beyond that to explore the humour in everyday family interactions and human nature, a style that has been compared to Mark Twain’s. He recently launched his own comedy channel Jeff and Larry’s Comedy Roundup, a partnership with SIRIUSXM and Larry the Cable Guy. Currently, Jeff can be seen hosting the FOX game show Are You Smarter Than a 5th Grader. Jeff started his own outdoor company, Foxworthy Outdoors, which features a line of products related to the outdoor lifestyle. Away from the stage, Jeff is involved with several charitable organizations including The Atlanta Mission, Charity Water and the Duke Children’s Hospital.

Larry the Cable Guy is a multiplatinum recording artist, Grammy nominee, Billboard award winner and one of the top comedians in the country. He has his own line of merchandise and continues to sell out theatres and arenas across the United States and Canada. He is the spokesman for Prilosec OTC and most recently launched his own comedy channel on SIRIUSXM with Jeff Foxworthy. He will also return as the voice of the beloved Mater in Disney/Pixar’s Cars 3, which is currently in production. In addition to all of his professional accomplishments, Larry created the Git-R-Done Foundation, which was named after Larry’s signature catchphrase. With an emphasis on children’s and veterans’ causes, The Git-R-Done Foundation has donated more than seven million dollars to great organizations such as The Arnold Palmer Hospital, Operation Homefront and Madonna Rehabilitation Hospital.